Camp Jack started this year on Sunday July 21st at Camp Oliver in rainy and wet Descanso. We had 52 kids show up at the Boys and Girls Club in Santee for the ride into the East County Mountains. We could have taken 75 but didn’t have that many sign up. Jeff Winters provided his usual transportation for the baggage that was packed in Cal Trans Orange bags.

We traditionally provide an outside Barbeque dinner for the kids which we cook at the Camp. This year we had to move inside thanks to the rain but Head Chef Nasif liked the stove and grill we used and that’s all that mattered. His assistant Dave Huntmaker did the hot dogs while Dick flipped the burgers. 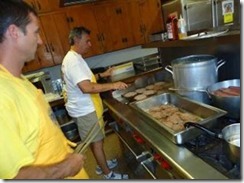 We had a large contingent of El Cajon Lions show up early to set up the mess hall, put out plates, silverware, glasses, and pitchers plus tables and chairs. We also manned lots of the serving stations and kept the food line supplied. 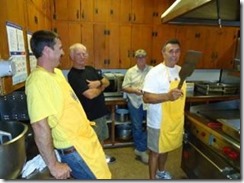 Those helping were, PP Bob and Mary who did a lot of set up work and left early. PP Don also helped with set up and serving as did Mike Wasyliw, PP Dick and Juli. There were lots Lions from others clubs in 4L6 that also joined the set up team, did food preparation and worked in the serving line. 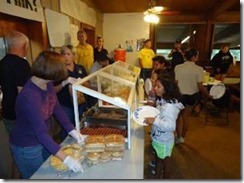 Working in the food line were, Bob and Sue Acker, PP Mark and Angel, Mercy, and Sharie, (PPRon was at OTL).

Chairman PP Hackworth and Dixie arrived with a flourish at 5:30 pm hoping all the work would be done and it was. He did a marvelous job of supervising after that. Great job Ray!!!

Missing in action were President Kiley who gave a very long and complicated story about a power failure which led to a water problem which prevented him from helping us. Also MIA was Rocco, who repeatedly answered his cell phone with “I’m on the way”. I’m not sure who he thought we were. But we never saw him.

By the time I left it had quit raining and most every one was done eating.

This entry was posted in events. Bookmark the permalink.