Lion PP Gary Robinson announced that the Lions District Christmas Party will be held on December 2nd at Town & Country with cost of approx $25.00 per ticket. District Cabinet Meeting will be held on Saturday October 20th. Halloween Carnival for persons with special needs will be held on October 27th sponsored by the Singing Hills & Santee Lions Club. Please continue to fill your City of Hope Cans. October 19th White Cane Day Banquet benefitting the San Diego Center for the Blind at the Balboa Park Prado. For info contact IPP Lion Don Anthony and join him at this very worthwhile event. El Cajon Centennial Parade will be held on Monday November 12th, that also commemorates Veterans Day, will have our Lions Float—help is needed on November 11th at PP Ron Snow’s business to help prepare minor modifications on the Float. El Cajon Valley Host Lions Foundation Finance Meeting will be held after our Lions meeting today. 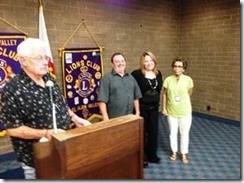 Lion PDG Len Blottin enthusiastically inducted our newest Lions Members Mike & Cindy Buchanan to Lionism who were sponsored by Lion 2nd VP Mercy Walters. Lion Mike Buchanan shared that giving back to the community is important and joining the Lions is a great way “to serve”. Lion Mike & Cindy have been strong givers to their community with their incredible love and dedication in raising 41 foster children and adopting a child with special needs 2 years ago. Mike & Cindy own a Marketing Firm and have launched a new business of fundraising for non profits and currently working on a fundraising project to raise funds for a Rady Hospital Campaign.

3rd VP Ray Ridlon, excused absence due to an out of town business trip.

2nd VP Mercy Walters announced that our Lions Community Service Adopt-a-Street Cleanup will be held on Saturday October 27th. All Lions are invited to participate to help keep our streets clean.

1st VP Kiley Grunstad, excused absence. Lion IPP Don Anthony gave an update on the Lions Pancake Breakfast & Car Show coming up real soon on October28th and asked that we keep selling the tickets, sign up to volunteer at the event and bring all our family and friends. A nice promo ad on the Lions Breakfast is in the El Cajon Herald along with announcements on our Lions Facebook Page. Lion Van Willsey gave an update about our Lions Facebook that in the past couple of weeks has registered over 150 friends and responses.

Lion Bob Acker, Tail Twister, vigorously collected the following Happy Dollars & Happy Fines: Lion PP Tom Hoban gave a Happy $20 for his extended Honeymoon Vacation going through Spokane, Yellowstone, Vegas, etc. Lion PP Ron Snow gave a Happy $20 and expressed his regrets on missing some of our recent Lions Meeting. Lion PDG Len Blottin was asked by Acting President Mercy Walters for a few Happy Dollars. Lion Len waved his Exempt Badge and indicated that his Happy Dollars were paid up at our recent Lions Meeting. Lion IPP Don Anthony gave a Happy $5 for the Aztec’s win! Lion PP Gary Sims gave a Happy $5 for his trip to San Filipe, Mexico and the Aztecs win along with contrition for some of his recent perceived unruly behaviors at our Lions Meeting. Lion PP Tom Hoban gave another Happy Dollar fine and apology for the missing key to the Lions Board Meeting. Lion Mike Carleton gave a Happy $5 that commended our Leo’s for raising 52 pints of blood for their recent Blood Drive. Lion Mike was asked about his Lobster Fishing where he recently caught 7 lobsters and bringing his total to 32 lobsters since start of the lobster season! Lion Paul Walters gave a Happy $10 for our two newly installed Lions Mike & Cindy Buchanan. Lion PP Ray Hackworth shared his Joke of the Week about the Hooded Armed Robber and gave a Happy $5.

Lion Felina Balistreri was the winner of the Attendance Drawing which she re-donated to our City of Hope Fundraiser. And don’t forget that pin you wear on your collar represents that you belong to the greatest service organization in the world…the El Cajon Valley Host Lions Club “2011-2012 District 4L6 Large Lions Club of the Year”.