Lion incoming president Ray Ridlon was profusely thanked for hosting our 2015-2016 Installation. It was an outstanding well attended event for all our Lions and their families.

Lion President Mercy Walters recognized the following Lions for their distinguished and dedicated service during the past year:

PP Hugh Cowan received a Certificate of Appreciation for serving 47 years as an El Cajon Valley Host Lion along with his 45th Year Chevron Pin. Lion Hugh stated that “..the Club has been a big part of my life!” 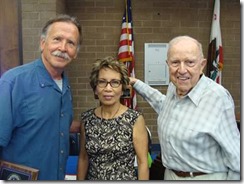 PP Jerry Hollingsworth and Lion Mike Wasyliw were awarded “Lion of the Year 2014-2015” in appreciation for their hard work and dedication to the El Cajon Valley Host Lions.

Lion Dick Nasif received a Presidential Pin Medal for his outstanding efforts on the El Cajon Valley Foundation Board as Gift Giving Chair!

Lion PP Bob Moreau received a Presidential Pin Medal for his incredible job as President of the El Cajon Valley Lions Foundation Board and recognized as “the Best Tail Twister this side of the Mississippi & the Best in 4L6!”

Lion PP Ray Hackworth received a Certificate of Appreciation & a Presidential Medal for being the “Heart & Soul and Guiding Light” of the Camp Jack Program. Lion Ray replied “..I love those kids especially taking them fishin!”

Lion PP Dick Rogers received a Certificate of Recognition for another great outstanding year as our Lions Publicity Chair!

Lion Jeff Winters received a Certificate of Appreciation for his outstanding efforts with the Camp Jack Program in transporting the campers gear & supplies!

Lion Ron Black received a Certificate of Appreciation for co-chairing our Annual Pancake Fundraising Breakfast and his great bartending efforts at our various Lions events!

Lion PP Tom Hoban received his 30 Year Chevron from Lions International and thanked for all the many ways he helps our Lions!

Lion President Mercy thanked all our fellow Lions for their dedication & support during the past service year and a Special Thanks to our awesome Lion Secretary Paul Walters!

Lion PP George Hurst gave a heartfelt Kudo to our Lion President Mercy Walters for her great service as our Lions President for the past year and for being “one of the most thorough, consiciencious, on track, dedicated president that we have ever had”—PRESIDENT MERCY ROCKS!

The El Cajon Valley Host Lions were presented a Certificate of Recognition from the Office of Senator Joel Anderson by representative aide Joel Bradfurlert for Outstanding Service in the East County Area and a Congratulations on a very successful Gunsmoke V Casino Night Fundraiser! 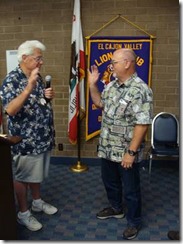 Lion PP George Hurst, Speaker Program Chair, introduced our featured Guest Speaker Kathy Quinn, Library Director of the Dr. William Herrick Community Health Care Library. The Herrick Library’s focus is on health materials for the layperson and has a variety of resources that include a collection of 2,500 health related items of books, medical videos, 10 public computers to do your own research, etc. The Herrick Library is located at 9001 Wakarusa Street in La Mesa Ca 91942 www.herricklibrary.org 619.825.5110

Attendance Drawing Winner was Lion Sharie Hoops who donated her winnings to our City of Hope Fund.

Our El Cajon Valley Host Lions are greatly saddened to hear that Lion Past President Gordon Bush has passed away on June 22, 2015. Lion PP Gordon Bush faithfully served our Lions for 51 years and will be greatly missed. Please keep Lion Gordon and his family  in your Thoughts & Prayers and may he Rest in Peace.