Lion President Mercy Walters opened the meeting at 12:30pm with some great booming news “…we done good… we ROCKED!…we were the most highly recognized club!” at the 73rd District  4L6 District Convention in Yuma Arizona this past weekend.

Some of the numerous awards we received were: El Cajon Valley Host Lions Club was recognized as the best Large Lions Club in the entire district! Most Service Activities Reports received! Most new members recruited! Most Visitations to Clubs in the District! It was a great T.E.A.M. effort (“together everyone achieves more”)

Some of the many additional outstanding individual recognitions included: President Mercy Walters  award for Lions Eyes Across California Chairperson and Certificate for most Individual Visitations to other clubs. Secretary Paul Walters award for District Student Speaker Fellowship Trustee and District Environmental Chair and Individual Club Visitations Award. PDG Len Blottin Certificate for District Nominating Chair Award and recognition for support of the San Diego Center for the Blind.

Jeff Smith was here for his 3rd visit to our club and Julia Sanchez from Canine Companions was here to receive a check from our El Cajon Valley Lions Foundation. Mrs. Sanchez was unable to attend last week’s Foundation Funding Awards due to being away on her honeymoom!

Lion Secretary Paul Walters reported that our next Board Meeting will be on Wednesday May 13th at PDG Len Blottin’s office 1000 N. Johnson in El Cajon. May 25th we will be DARK. This Friday May 8th El Cajon Police Awards 6pm at Reagan Community Center.

Lion Dick Nasif and Lion PP Bob Moreau from the El Cajon Valley Lions Foundation presented two checks for $5000. to Julia Sanchez and her dog Duncan from the Canine Companions for Independence.

2nd VP Van Willsey had Lion PP Mark Clifton report on Adopt a Street Community Cleanup which will resume in June. Lion Van commended PP Bob Moreau for organizing efforts on getting a good contingent of fellow Lions to the District 4L6 Convention this past weekend. If you haven’t been to a Lions Convention sign up next year—all Lions are welcome! 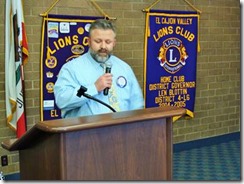 Our featured guest speaker this week was “our own” Lion Justin Stewart, from Opus Bank,  who shared some of his life experiences along with his career in banking. Lion Justin comes from an agricultural family from Kansas City and he has 3 degrees in physics, micro biology and finance. He has been playing the violin since age 7 and has handmade 4 violin’s and became an Eagle Scout which helped him to get into Medical School which he tried for 1 year and said he hated it and decided that banking was his business. As manager for the Opus Bank which formed in 2010 the bank’s focus is primarily on developing small businesses in the community. A good business referral to Lion Justin would be a small business owner who had probably been turned down by some of the larger banking institutions. A small business would be defined as having annual revenues of $125,000 up to approximately $40-50 million. Justin mentioned that banking interest rates on savings are still quite low and unfortunately will probably never come back to what they were years ago. One of the personal best bang for your bucks is putting money into Real Estate and that Commercial Real Estate is presently making a big comeback.

Glad to hear that we had a very successful & highly praised ECVH Lions Club at the Yuma Convention!

Thanks to all fellow Lions who have sold and will sell our Gunsmoke V Casino Night tickets and sponsorships.

And don’t forget that Lions Pin you wear on your collar or blouse represents that you belong to one of the greatest organizations in the world—the El Cajon Valley Host Lions “Best Large Lion Club in the District!” WE SINCERELY APPRECIATE YOUR ATTENDANCE AND MEMBERSHIP!